Did you know that you can:

Are these what you're looking for:

Choose the customised Power and Water home page that suits your needs best.

Power and Water’s Photovoltaic (PV) and Battery Energy Storage (BES) System Specification divides systems into 4 different types of connections, Basic, Negotiated, Large Embedded Generation and Transmission Connections. This applies to systems of all sizes and both residential and commercial customers.

We require all solar and battery energy storage system installers to hold current Northern Territory electrical licenses, as well as current design and installation accreditation and endorsements with the Clean Energy Council. Accredited installers must only install approved CEC equipment.

1 1 hour continuous inverter output (AC) rating in kVA. Sum of all inverters must not to exceed limit.

2 Rate of charge from the network must have a variable set point commencing at 1kVA to allow for future changes in this specification.

On 24 August 2020, Power and Water published our draft Basic Micro EG Technical Specification and Negotiated EG Technical Specifications for stakeholder consultation. The new technical specifications represent a step change for Power and Water, bringing us into line with other network businesses across Australia in terms of how we classify and set out our technical requirements. Importantly, the specifications also introduce new requirements for inverters to better respond to power quality issues on our network and the concept of "virtual power plant-ready" (“VPP-ready”) battery energy storage systems (BESS). These requirements will ensure that only smart and safe inverter energy systems are installed in the Northern Territory and will further assist in enabling Power and Water to accommodate higher penetrations of embedded generation in the future.

In response to the consultation draft we received a number of submissions including from the Power and Water System Operator, the Clean Energy Council and broader industry stakeholders. After carefully considering these submissions, we are now publishing the final technical specifications. The final technical specifications are, overall, largely consistent with the consultation drafts, but include several critical changes in response to submissions as well as recent changes in our operating environment.

Over the last six months, demand for electricity in Northern Territory at peak solar output times has fallen faster than was forecast. The rapid change is due to both the continued uptake of behind the meter solar photovoltaic (PV) and the impact of Covid-19 on electricity demand in the Territory. Concerns are emerging that where demand falls below minimum operational levels, this could represent a real risk of the electricity supply being disrupted. For our System Operator to manage this risk, at the same time as accommodating high penetration renewable and distributed generation in our network, we need to increase the level of monitoring and control of behind the meter systems.

This issue is not specific to the Northern Territory. Recently the South Australian Government has introduced new technical requirements for inverter energy systems which enable domestic scale systems to disconnect where demand is likely to fall below minimum operational levels as well to require all systems to have the capability to adopt dynamic export limits.

Power and Water, in conjunction with NT Government, is seeking to address issues with low demand periods as a critical step in realising our renewable energy targets. We are considering various medium term initiatives including updating our systems to provide increased visibility and control of behind the meter DER as well as considering centralised solutions such as large scale batteries. However, in the short term, we need to ensure that the issue is not further exacerbated.

Proposed changes to the Consultation Drafts

We are proposing that the current capacity limits for basic micro EG connections of solar only systems1 will remain in place, and that the transition to the 10 kVA per phase limit set out in the draft consultation technical specification will be confirmed as we establish the appropriate processes and systems to enable remote monitoring and control of solar systems (potentially similar to the approach adopted in South Australia) to maintain system security, or until the issue has been alleviated by other initiatives. Where customers are seeking to install larger systems, they may still make an application to connect under our negotiated connections process.

In addition we are also proposing to mandate the “VPP-ready” requirements for systems that include BESS, by changing Clause 4.11 in our technical specifications from a “should” to a “shall”. This change will apply to both the Basic and Negotiated EG Technical Specification. Requiring VPP-ready capability will ensure that any BESS installed is able to contribute to alleviating local and system level constraints in the future.

We have also introduced a number of other changes including updating export limits to be expressed in kW and reducing the ramp rate for a decrease in power to 6 minutes. These changes better reflect the capabilities of existing inverters in the market at this time.

Over the coming months, Power and Water will be completing a study to further understand the near term risk of low demand conditions and confirm the actions required.

The outcomes of this study will then be used to review both the Basic and Negotiated EG Technical Specification, and in particular, the potential to increase maximum system capacity limits for basic connections and the need to mandate remote disconnection and reconnection for all systems to maintain system security.

A zero-export limiter is a device that is used to ensure that PV and BES systems generates as much power as the user requires onsite but not excess energy.

Utilities around the world encourage the use of these devices as they reduce adverse impacts within the local distribution network while still allowing users to significantly offset their consumption.

A list of zero-export limiting devices, approved from a technical standpoint as being capable of achieving zero-export by Power and Water is available.

Please ensure that any device on the list that offers protective functions can be set to match protection requirements for inverters as specified in Technical Requirements for Grid Connection of Photovoltaic Systems via Inverters.

If you have a zero-export limiter device that is not approved by Power and Water, Power Networks Engineering will review the device. Please complete the Zero-Export Limiter Device Approval form and send to the Network Development and Planning team.

The following list contains devices from a technical perspective that are capable of achieving zero-export for PV and BES systems. Some of these devices offer protection functions similar to the internal protection found within a CEC approved inverter.

It is the responsibility of the PV and BES system designer to ensure that the protection functions provided by the zero-export limiter are capable of meeting Power and Water's protection setpoints as detailed in Technical Requirements for Grid Connection of Photovoltaic Systems via Inverters.

A solar PV power system converts energy from sunlight into electrical energy. Save money and the environment. Find out how a PV system could offset your home or commercial power needs. 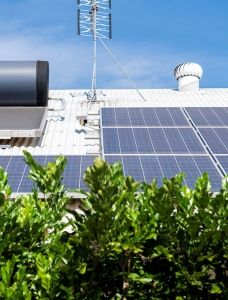 Power and Water operates in the Territory, an environment with relatively undisturbed ecosystems. We recognise that our environmental management activities have the potential to impact these ecosystems. Discover our plans for protecting the Northern ... There are currently no outages in your area!